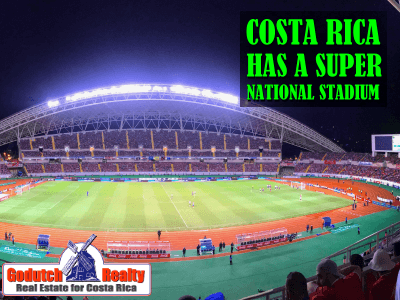 The soccer stadium just finished as a gift from the Chinese Government is certainly a state of the art.

My son and I went to the soccer game between Costa Rica and Argentina. We went early to look over the new National Stadium and support Costa Rica against one of the better soccer teams in the world.

Messi who is currently the best soccer player in the world did not play which was a disappointment for all who attended.

The game ended in a 0-0 tie which was more of a win for Costa Rica than a loss. The stadium, however, was impressive and I will share some pros and cons.

The stadium will be a landmark for Costa Rica for years to come. The architectural design and actual construction are first-world and just walking around and seeing the stadium from different vantage points makes you realize how massive and beautiful it is.

The design is excellent for people entering and there is plenty of room in the walkways to move. There is ample legroom between seats which is nice compared to some stadiums I have been to in the States. There are plenty of restrooms. The lighting is first class and the visual screens at both ends of the field are nicely done.

The stadium is good for spectators. We were up high in the cheap seats and could see the action throughout. The people working there were friendly and courteous. There was entertainment before the game consisting of bands and groups of dancers. There were places for food and yes, even vendors walking up and down selling – what else – coffee- we are in Costa Rica you know.

Fans were having a good time and at the end of the game very calm when leaving – maybe it was the score or maybe no beer – hard to say. We enjoyed the game.

Just me personally but I have never been a big fan of stadiums where they surround the field with a track and field. I would much rather be closer to the field of play. I do not know how many track events will be done here in Costa Rica but have never seen huge interest. I suspect this was part of their design for other stadiums and they went with the design.

The food place and eating areas were rather small and in a horseshoe shape instead of side by side so it created a real log jam at half-time. We tried but could not get close. I was trying to make my way to the hot dogs but settled for a Pops ice cream vendor.

The biggest problem – after the game trying to make your way out of the Sabana area. A total traffic jam. It took us about 1.5 hours to reach Alajuela by bus. There is minimum parking around the stadium and the best bet is the bus or a taxi.

The stadium is new – crowds will diminish- so maybe this problem will be better. Organizers really have to try and solve the traffic problem.

Overall, I think the stadium is great for Costa Rica. The soccer team is good but perhaps the stadium and new coach will be the incentive to reach a higher level of play and compete worldwide. 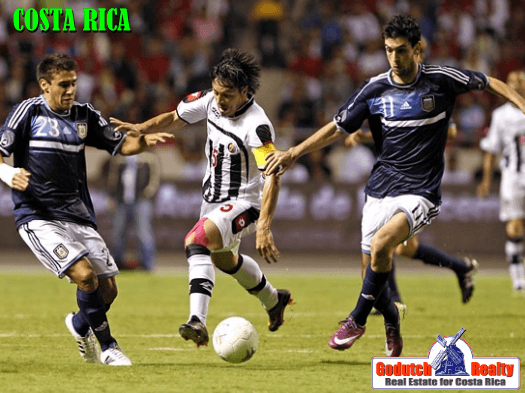 For me – I really try to like soccer but my take is – with a field that big, many players, and a large goal it should be impossible to have a 0-0 score. Somewhere the rules have to be changed for more scoring. I think the offsides penalty needs revising. For you football fans the offsides penalty in American football would be – if the receiver gets behind the defensive back and scores a touchdown – the touchdown will not count because he was behind the defender. That is basically what happens in soccer- taking away many scoring opportunities.

I want to remind our readers that we appreciate any referrals you can send us. Also, remember GoDutch Realty when talking about your home in Costa Rica to friends and family. We appreciate it.